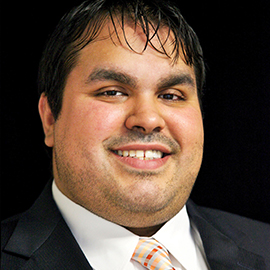 Hector De Haro joined the firm in August 2014 after clerking for Bush Gottlieb his second and third year of law school.

After receiving his Bachelor’s Degree in American Studies from Yale University, Mr. De Haro attended the University of Illinois College of Law. He graduated magna cum laude and was inducted into the Order of the Coif—an honor reserved for the top ten percent of a graduating class. During law school, he was awarded the CALI Excellence for the Future Award for receiving the highest grade in multiple classes, most notably Labor Law. He served as an associate editor of the Illinois Journal of Law, Technology, and Policy. He was also recognized as the Best Oralist in the honorary round of the Frederick Green Moot Court competition.

Before law school, Mr. De Haro was an organizer and campaign coordinator with the Service Employees International Union for nearly five years. During that time he worked on new organizing campaigns in both the public and private sector. He was also involved in legislative advocacy campaigns and in representational matters concerning current union members.