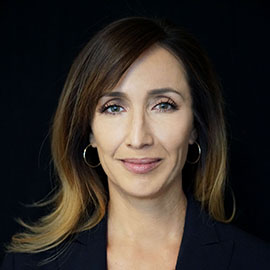 Dana S. Martinez joined the firm as a partner in 2018.  Prior to coming to Bush Gottlieb, she served as a partner in another Los Angeles based union-side labor law firm where she practiced law for over 17 years.

Ms. Martinez has extensive experience representing unions in both the public and private sectors.  Her practice includes administrative hearings before the Public Employment Relations Board, the National Labor Relations Board, the Office of Administrative Hearings, Personnel and Civil Service Commissions and the Los Angeles City Fire Department Board of Rights.  She has conducted numerous arbitrations and has litigation experience in both state and federal courts, where she has represented clients in civil and criminal matters– including civil disobedience.  Ms. Martinez frequently acts as Chief Negotiator during collective bargaining.  In addition, she provides legal assistance to unions regarding day-to-day operations, internal elections, and issues affecting the union as an employer; participates in strategy sessions with clients; assists with member and political organizing; provides legal support for collective action; and trains union officers, leaders, organizers, staff and business agents on a variety of topics.

Prior to practicing law, Ms. Martinez was a union organizer with H.E.R.E Local 11 (UNITE HERE!).  As a union staff member, she was in charge of internal organizing for unionized restaurants, hotels and entertainment venues all across Los Angeles.  Ms. Martinez recruited and trained shop stewards, serviced union houses and handled grievances.  When an employer sub-contracted with a non-union operator at a unionized commissary, she successfully lead a campaign against the union busters and restored the union’s presence as well as the workers’ jobs.  She also trained student volunteers and acted as campaign manager for internal elections.

Ms. Martinez received her Bachelor of Arts degree in Political Science from UCLA and her law degree from USC.  During law school, she worked at the National Labor Relations Board, Region 21 and in the Office of White House Counsel under the Clinton administration.

Ms. Martinez is active with the AFL-CIO Lawyers Coordinating Committee. She has served as a Board member and is currently a member of the Minority Caucus and Women’s Caucus.